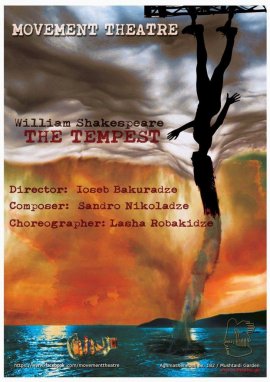 The Tempest
Prospero is the rightful Duke of Milan. However, when Prospero's brother Antonio usurps the throne, Prospero escapes death simply by chance. The duke finds himself on a lone island together with his daughter Miranda. The island is inhabited by the aerial spirit Ariel and the unsightly slave Caliban. Prospero learns sorcery and uses his powers to protect Miranda. 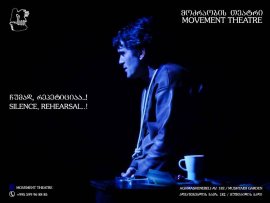 One-Act performance that shows what is happening behind the curtain. Rehearsal where the director is talking with the audience and actors as well and explaining how they use to work on performance while it will be presented to the spectator finally. The performance consists of different small novels: 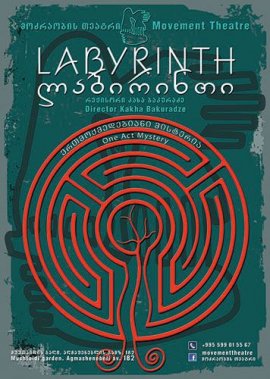 Labyrinth
One-act Mystery with live music
The performance describes different phases of human’s lives. People are moving in endless labyrinth like social, urban, emotional or communicative. Often we are creating labyrinth and we do it unconsciously.
The audience is undivided part of the performance, they can move around the stage and watch the performance from the different angles. 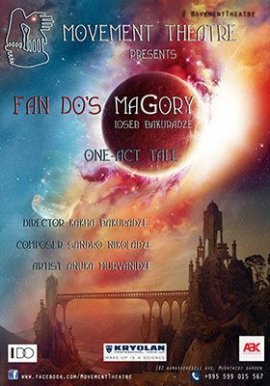 The performance is the synthesis of bodyart and fairy tale.

The story unfolds in the mythical continent of Pompos, which is ruled by the family of Fans. A dangerous fugitive criminal from prison kidnaps Dos, the Princess of the Empire of Pompos and locks her up in a horrible castle which clumsy Tio and Stubborn Jina attempt to unlock. 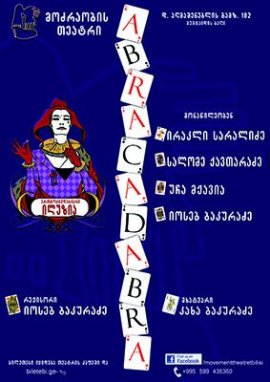 Abracadabra is one act illusion.

The famous illusionist is late for the performance «Abracadabra». At that very moment its lookalike leaps on to the stage instead him. The lookalike is trying to show the audience as many tricks as he can until the illusionist turns up in the theatre.