The Story Of A Murderer

Young Don Juan walking from house to house to his lovers with his servant-Sganarel. Suddenly on the square they meet Commodore’s statue. Comic story about why does Don Juan left the city and for whom he came back. 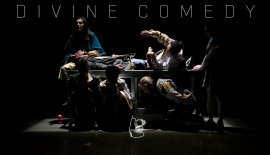 Sandro Nikoladze's Musical Alegry
"Intro" is the masterful combination of dramatic circus and modern theatre.The music show, which represents the visions of Sandro Nikoladze, the composer, comes to life on the stage. 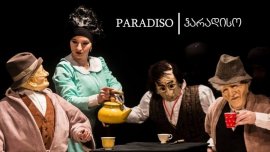 Irakli Khoshtaria's one act play wih puppets - "Paradiso".
The story takes place in elderly shelter where three old man with different nationality together count on their last days on earth. 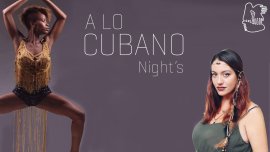 May 22  - 20:00
Every Wednesday we invite you to A Lo Cuban Night's Dancer from Cuba will teach you Latin Dance with live music from Mary um

May 19  - 20:00 “Igi” is the stage version of one of the remarkable stories written by Jemal Karchkhadze, the 20th-century Georgian publicist and writer, which tells the story of human evolution, from prehistoric times to the formation of personality and the fight with the environment and society since then.

Premiere "Faust"
Johann Wolfgang von Goethe
Director: kakha bakuradze
The devil's constant wrestling for the temptation of the man. The Lord permits the Mephistophell to test the Faust with any temptation and take him to the abyss.